You didn’t think I would leave that cliff-hanger of a post out there for too long, did you? So we found the island with the little submarine on it.  Isla San Telmo is a gorgeous uninhabited islet which has been taken over by pelicans, thousands of them. 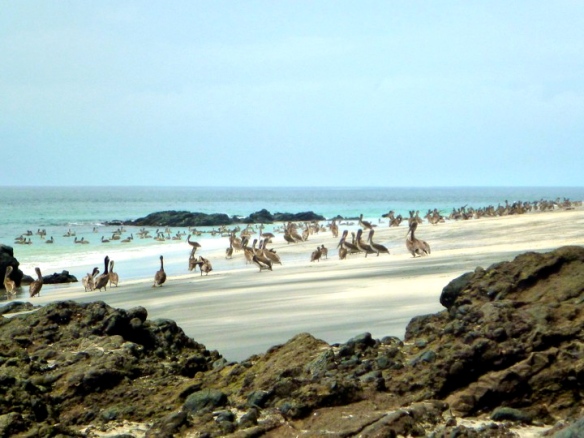 San Telmo is one of 200 islands within the Islas Las Perlas archipelago, about 40 miles from Panama City. 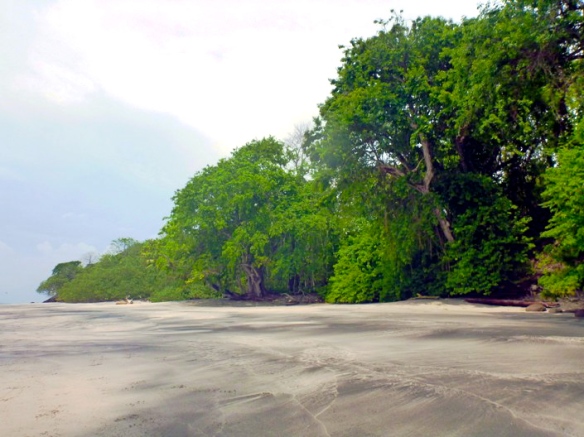 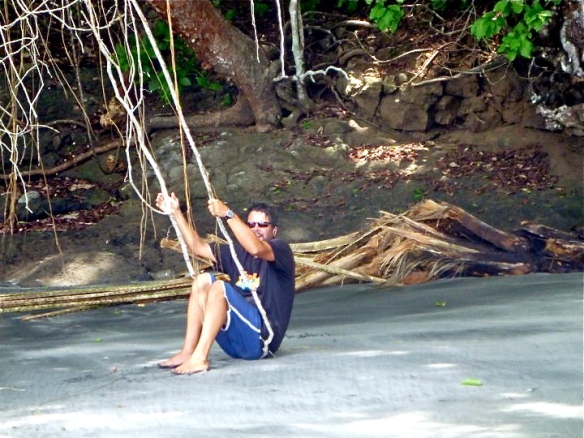 Tarzan needs to lay off the carbs

Most of the islands are uninhabited and a few have served as location for the reality show Survivor.

We anchored in uneven ground about a 1/4 mile offshore from the little sub. The ancient artifact is about 20 feet long and made of steel that looks like it was 2 inches thick originally. 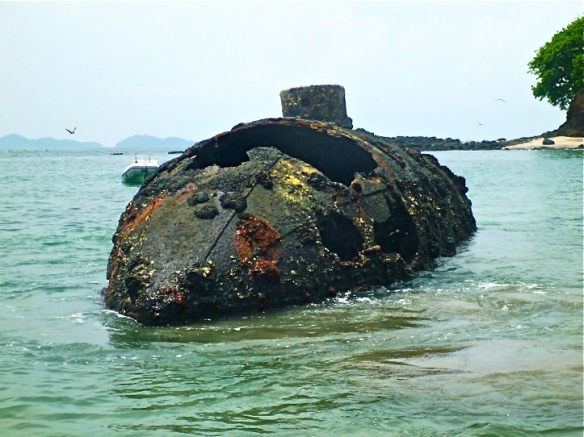 Its amazing to me that its still there more or less intact after nearly a century and a half of being covered and uncovered by the tides as it sits in its final resting spot up on the sandy beach. I like to imagine what it was like when the thing was originally deployed around the time when the French were just starting to dig their proposed sea-level canal (read the fascinating The Path Between the Seas), most ships still used sails to get around and Panama was a remote outpost of Colombia. How futuristic it must have seemed for this underwater contraption to set out on its pearl-hunting mission. The Las Perlas (the pearls) are so named because they were abundant in those natural jewels – so much so that someone built one of the first submarines just to exploit them. What caused the poor crew to ascend too quickly and get decompression sickness? How did it all go wrong? Who knows. All that we have to go on is the rusting steel hulk and our imagination.

The charts of this area are terrible – generally based on surveys conducted decades, or even a century, ago and containing very little detail. Areas like these see little commercial shipping, so little official cartographic attention is devoted to them. In addition to two different sets of charts, we rely on guidebooks written by people who have independently surveyed the area and prepared their own charts for certain locations. All the charts we had for this area, when they had any detail at all, showed us in waters with a minimum depth of about 20 feet at low tide and that is about what we saw. However, when we upped anchor to leave and were slowly motoring out of the anchorage, the boat suddenly lurched to the right and we slowed to a stop with horrible crunching sounds. These are such unnatural motions and sounds for a boat that it causes instantaneous confusion and panic. It took several seconds for me to compute what had happened and get the boat into deeper water. We had hit an uncharted rock pinnacle! We were moving at about 4 knots when the water went instantaneously from 30 feet deep to about 4 feet. It was not shallow water because once we ground horribly over the thing we were back in 30 feet of water. We frantically lifted floorboards and opened hatches to inspect for water intrusion but thankfully the boat was dry. Out in these remote islands there is no assistance for miles around so we were on our own as to what to do about it.

We slowly puttered to our next anchorage to gather our wits and plan next steps. Wouldn’t you know it, but just then the skies opened and deluged us with one of Panama’s patented rainstorms. Being out in one of these you actually feel the weight of so much water coming down. The rain makes visibility so bad that you can’t see even the front of the boat, let alone land or anything else out in the water (including the many logs and trees that float out of the rivers and estuaries and must be dodged). We were left to rely on our instruments, which had just tragically let us down, to get to our anchorage. We slowed to a crawl and with frazzled nerves finally got the anchor down in a safe spot. I dove to inspect the damage. One of our daggerboards (large foil-shaped boards that we raise and lower to act as keels) and skegs (a small keel-like appendage forward of the propeller) were damaged in the  impact. And our rudder, the last thing to hit the rock as we slid by, had its bottom corner chipped open. We have saildrives for propulsion. These are like outboard motor legs that stick straight down through the bottom of the boat just in front of the rudders and have a propeller on the end. Miraculously the rock passed just under the propeller and saildrive leg. Even though they are only barely higher than the rudder, they were unscathed. The rock must have passed only an inch or so below them. If they had hit the rock, it is likely the drive would have shifted on its mounting and let water into the engine compartment. Our boat is broken into water tight segments and since it is built of foam-cored fiberglass with no lead keel, it is very difficult to sink. So this would have flooded the engine room but not sank us. Nevertheless, it was a huge tragedy narrowly averted.  Still and all, we had some damage to ponder and immediately began planning what to do. 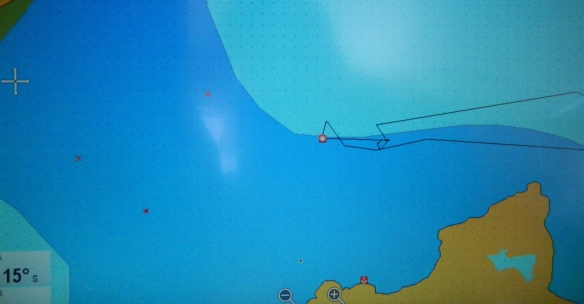 location of rock – note the drastic change of our track

Next:  Boat repairs in remote places.