Panama City meant one thing to us:  the Canal.  Transiting it was our major goal for this year, so I did not give the city itself much thought.    We ended up staying there much longer than we anticipated (see rock post) and decided to embrace the opportunity to explore this historic city.

So cue the skyline, public transportation and museums because we were back in a real honest to goodness big city!   And just like every metropolitan area you get the good with the bad, so we dusted off those NYC street smarts, threw our Panama hats in the air and enjoyed every second of city living.

Open just two months, Panama’s new Metro was a terrific way to get around town. 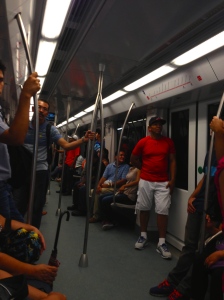 and part bustling port city that, of course, centers around their main cash cow, the Canal.  Oh and lest I forget malls.

I’m not a shopper, but did enjoy the air conditioning and cheap swimsuits, otherwise they just seemed like a labyrinth of the usual suspects, ubiquitous food courts and multiplex cinemas.  But the main transit center is at one of the malls, so you always had to pass through on your way to everything else. 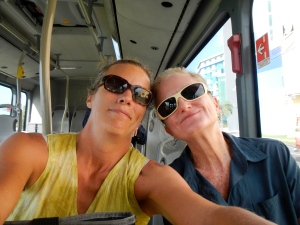 My friend Robin & I mastered the buses!

Casco Viejo (Old Quarter)  is the historic district of Panama City.  It was established circa 1673 by the Spanish colonialists.  Majestic homes, cathedrals, government buildings all went neglected around the 1950s – when we all should have invested in the area.  Because now there is a renovation boom.  It is fascinating to see the renaissance in action.   Street by street it changes before your eyes, turn to the left you see a private residence being lovingly restored, to the right are the shells of buildings ripe for repair, look behind you see a rather dodgy area with squatters occupying buildings in ruins and straight ahead are impeccably restored buildings which house restaurants, shops, hotels, embassies, etc.    It has a similar look to the French Quarter in New Orleans without the drunken revelers. (Click on the photos in the gallery to enlarge and read descriptions) 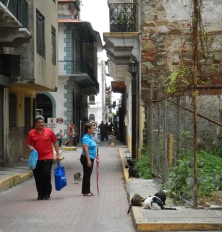 Lots of stray cats, cared for by locals.

The famous Panama Hats are actually made in Equcador

Ready for a remodel

Peter and Mike love shopping, but look at that gorgeous tile floor

Rainy afternoon on the streets of Casco Viejo

Peter’s new bud we met in Casco Viejo. He was born in the Canal zone and had LOTS of stories.

No, I didn’t bring this one home, just gave her some love. 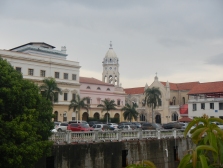 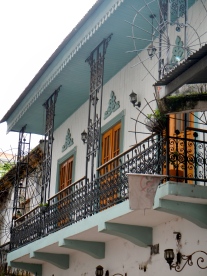 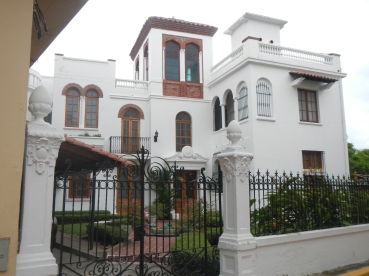 Older you say, you want to see older than 1673.  Alright, Panama Viejo is for you.  This was the original Panama City founded in 1519 before it was shifted to Casco Viejo.  Now they are just ruins which are incorporated into a museum and park.

And of course we ate and drank and watched more soccer during the World Cup than we had in our entire lives. 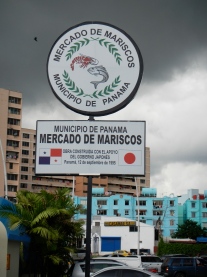 Fantastic ceviche for lunch at the fish market

Lucy has had enough soccer to last a lifetime. 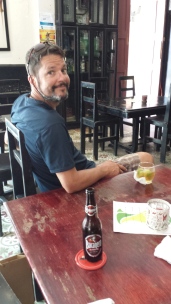 Oldest cafe in Panama City (Est. 1875) Classic rice and beans and excellent coffee. That cat slipped in the door right after I took this photo.

Patrons in Coca Cola cafe, they were right out of central casting. We had a great lunch here. 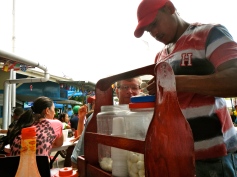 Quail egg down the hatch 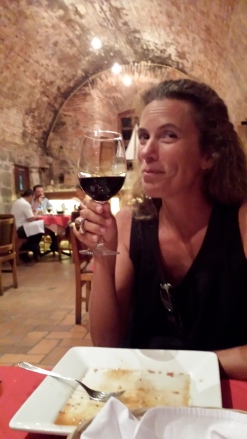 Las Bóvedas restaurant in the vaults of the old customs building.

We hiked off all that food and booze in rain forests and parks throughout the city. 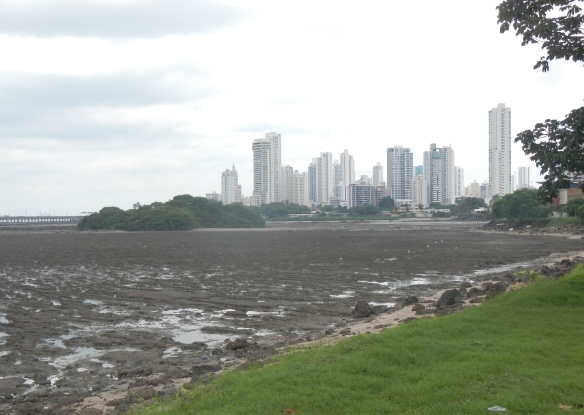 This is a good example of the 18′ tides they have on the Pacific side of Panama.  This will all be underwater at high tide.

Hanging birdsnest in Parque Natural Metropolitano, rainforest inside the city 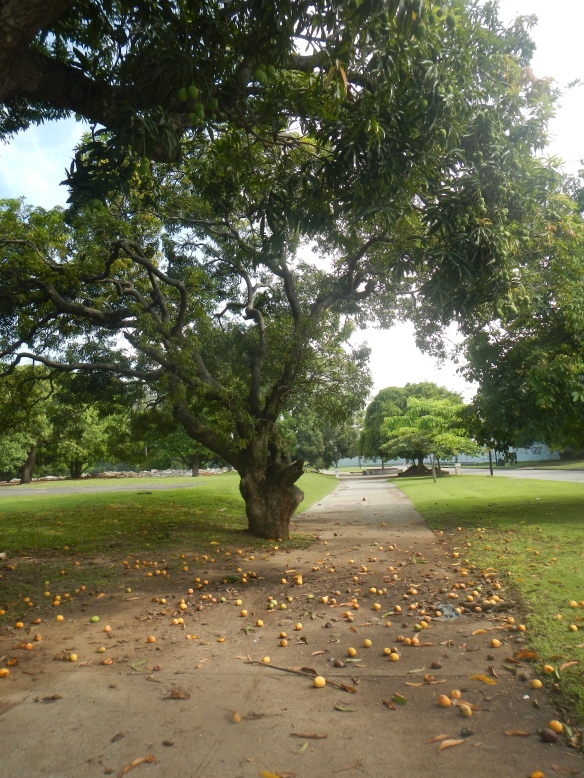 View of the city from the top of Parque Natural Metropolitano

And of course we went to the Panama Canal Museum and Miraflores locks to get an education on what was in store for us!!!!