Neko, which means “cat” in Japanese (we like simple names), is a Switch 51 built by Sud Composites in the south of France in 2004.  She was originally named “Tatajuba” and owned by a French family who sailed her half way round the world to Raiatea, French Polynesia.  That’s where we bought her and had Thierry Torres, a wonderful and crazy French delivery skipper, bring her back for us.  She was kept in very good shape and we have done some updating and improving.  The Switch 51 is a high performance cruising boat designed by notable multihull designers Marc Van Peteghem and Vincent Lauriot Prevost.  Above the waterline she is built in vinylester sandwich with a Klegecelle PVC foam core creating a strong, stiff, lightweight boat.  The Switch 51 carries dual daggerboards and a tall, high-aspect ratio sailplan, assuring good performance in light and heavy winds. 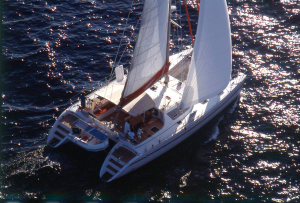 Here are some basic specs:

Construction:
The hull, bulkheads, nacelle, deck, roof and cockpit are constructed from fiberglass/vinylester and foam sandwich composites and the interior fittings are made from honeycomb. The monolithic bottom hulls are made of solid glass reinforced vinylester. She is fitted with grounding skegs to protect the saildrives and crash boxes located at the bows and at the swim platforms. Her engine rooms and forepeaks are both equipped with watertight bulkheads. She is the twelfth catamaran of the Switch 51 series and is CE approved – Category A (Ocean). 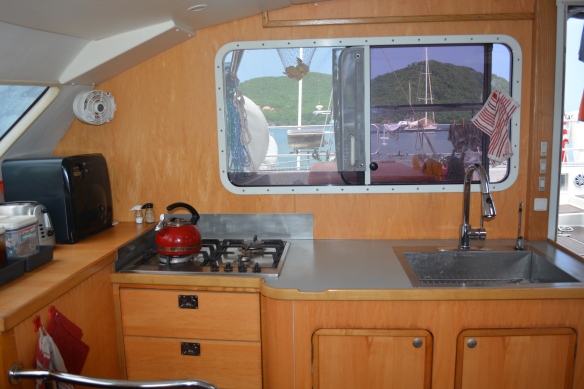 Electric system allows boat to plug in anywere in the world and run any appliance.

Upgrades and Improvements:
All new Raymarine instruments throughout (2013)

3 thoughts on “About the Boat”