Sometimes we have to remember to get off the boat for more than going to the grocery store or hunting boat parts. For me at least, if I don’t make the effort to find out what is unique about an island, time can just slip away obsessing over the boat “to do” list and waiting for weather windows.

Our recent stop in Montserrat was the perfect reminder of why we make the effort to travel at slow speeds to remote locations. You don’t go to Montserrat to idle away the time on your boat watching sunsets and fixing things – the anchorage is much too rolly for that. Perhaps it is old Neptune’s gentle kick in the ass to get off the boat and explore and meet the locals.

Our new pal who talked up a storm. We loved ever second.

It’s a small island set off by itself with a marginal anchorage so it does not get a lot of boat traffic.  When we were there only a handful of other boats came and went.  But that is part of its charm.

Most of the islands in the Caribbean are volcanic in origin and several of them bear the scars of human suffering at the hands of the volcano. But none present the modern day tussle between man and mountain as does the beautiful green island of Montserrat. 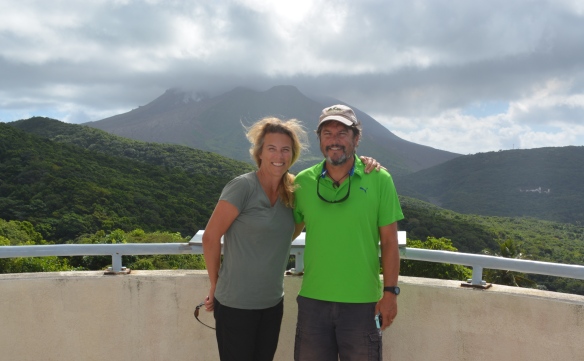 Perfect view of Soufrière from the Montserrat Volcano Observatory

The Soufrière Hills Volcano on Montserrat lurched back to life in 1995 after about 400 years of slumber, and continued to erupt on a periodic basis for the next 20 or so years.  It still rumbles and spews in its high redoubt.  No glowing basalt flowing down the sides like the dramatic ones in Hawaii, Soufrière brought showers of ash and pyroclastic flows of mud, rock and ash to the inhabitants of its capital town Plymouth.

Photo illustrating how high the ash and mud was. Just the top of St. Patrick’s church steeple peeking out with church buried below.

29 people are said to have died in the eruptions.  The volcano caused massive disruption among the populace, many of whom had to abandon their homes and take temporary shelter in schools, churches and wherever could be arranged.

All residents now live North of the red line.

“Temporary” stretched into years as the volcano refused to go back to sleep and the daily activity and commerce moved to Little Bay on the northern side of the island.  The island had 11,000 inhabitants before the eruption and only about 3,000 now.  Many fled the hardships of life on the island.

Joe Phillip is a lifelong resident of Montserrat.  He offers a tour of the areas devastated by the eruption accompanied by his story of surviving the aftermath.  Joe had a lovely house in the danger zone that he abandoned when the volcano erupted.  Realizing life in the shelters would be cheek by jowl with only a cot as personal space, he commandeered a classroom in an abandoned school and made it his home for two years.  He snuck back to his old home and brought back appliances to furnish his new quarters.

At a low point and about to leave the island, he made a commitment to his island home and decided to stay, despite perhaps disappointing his wife.  When he could he bought a small plot of land and built a new house.  Joe took us on an emotional tour through his old town and showed us his and his neighbors’ houses under a foot of ash and being reclaimed by the jungle.  It is only a matter of time before the jungle wipes this once-thriving little town completely away as if it never existed. 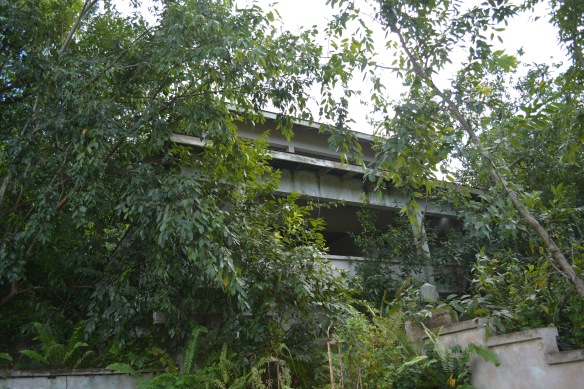 Soon the trees will completely cover these homes. 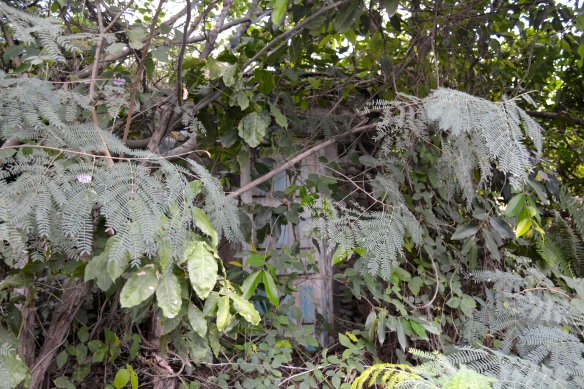 can you see the house in there? 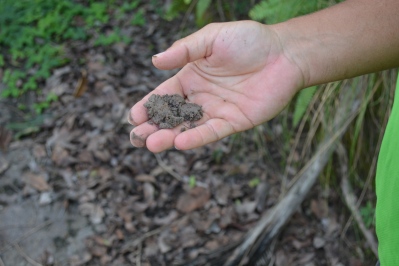 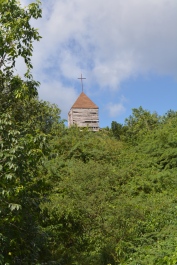 Just the top of the church steeple showing, otherwise you wouldn’t know there was anything in there.

We went into an abandoned condo on the outskirts of Plymouth to view the devastation of the capital city of Plymouth.  It is buried some 30 feet deep – not by ash as some think, but by the mud that washed down from the denuded hills after rains.  It is sealed off and no one is allowed in without government permission and a police accompaniment.  It is a stark, lifeless place that feels like a Planet of the Apes movie set.

Joe pointing to where Plymouth lies under ash, mud and trees. 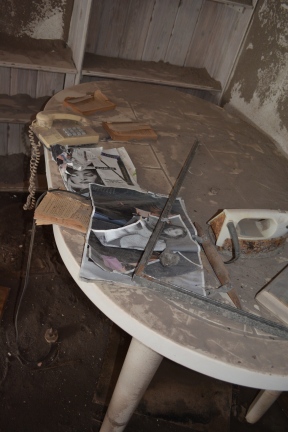 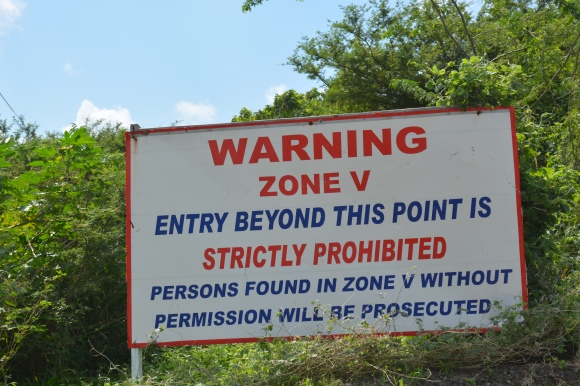 But Montserratians are a happy bunch and have taken it all in stride, even making lemonade out of lemons or should I say cement out of rocks.  Realizing that volcanic sand makes for better cement than salty beach sand, Montserratians have started several businesses to mine, refine and ship the valuable black sand.

breaking up large volcanic rocks to produce and sell cement.

We were greeted by smiles and wishes that we enjoy their island everywhere we went.  The food and drink are great, and we especially enjoyed a big lunch at Pont’s Place, where he decorates his outdoor dining area with all sorts of things he finds on land and at the shore.  It’s a delightful spot overlooking the sea.

interior of Pont’s Point restaurant decorated with flotsam and jetsam

There is a spring on the island where it is said if you drink from it you must return to Montserrat.  We gladly sipped some hoping its magic is real.

Tasting from the fresh springs on the island.

8 thoughts on “Going With The Pyroclastic Flow”