Antigua is an island with English ties, and you can certainly feel it and see it at English Harbour, a beautifully restored British naval site first established in the 18th century. British naval hero Admiral Horatio Nelson was stationed here when this harbor (surprisingly small when viewed in person) was the base for British defense of its colonial isles. The historic harbor here, now called Nelson’s Dockyard, has been restored and contains many interesting relics and ruins showing what life was like in a colonial military outpost. 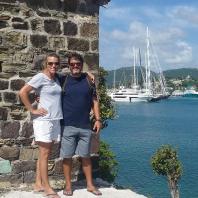 English Harbour (yes with a U)

Looks like a recreation at Disney World, but the real thing

Johnny, Shelley and Pete enjoying the view from Fort Berkeley.

English Harbour with Falmouth harbour in the background

Nowadays English Harbour and neighboring Falmouth Harbour are a stopping point for some of the most impressive megayachts in the world. 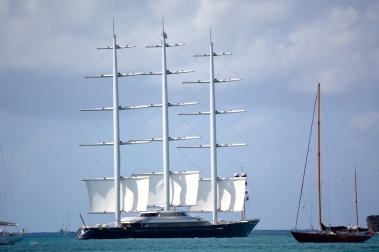 One day they all blew their horns at the same time. You wouldn’t believe the sound.

This makes for good eye candy but renders the port a little lifeless for us simple cruisers. But hanging with Shelley and Johnny from s/v Planet Waves always brings life to any party. We spent a lot of high times with them including one hilarious night casually chatting on the dock when a guy rode up on a donkey and tried to sell him to us for $5.  Sorry I don’t have a photo of him but here is said donkey, Selassie named for Ethiopia’s Emperor, Haile Selassie.  If he would have fit on the boat, I’d have bought that sweet donkey.

English Harbour is well worth a visit for its historical importance and provides easy bus access around the island.  We rode across the island to see what’s what in the capital of St John’s (not much).

What do they do for the countrymen they don’t like 😉 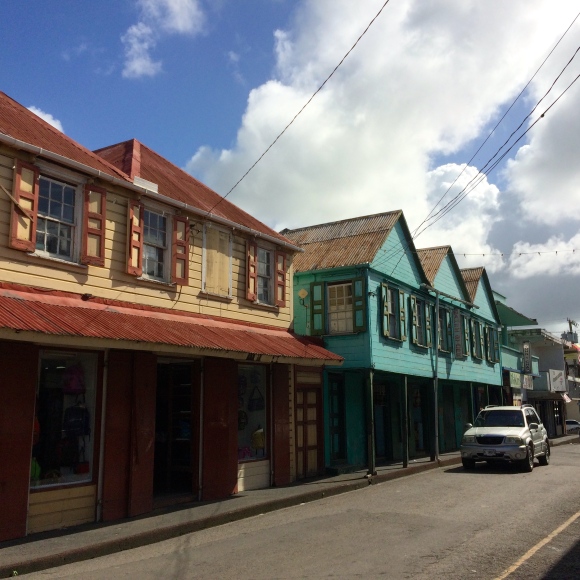 If you visit English Harbour everyone will tell you to go up to Shirley Heights Lookout for the view and Sunday night party. This may be the cynical curmudgeon in me talking, but I don’t see the big deal. Yes, the view is nice but it is jammed packed with every other sucker that believed the hype trying not to spill their overpriced drink as they attempt a clear view of the sunset. I say grab your flask and take the easier hike up to Fort Berkeley and get a spectacular view of the harbor and you’ll have the place to yourself.  Even with our old jaded attitudes we were able to connect with a younger generation of cruisers (how is that possible?) by meeting up again with Nightingale Tune and new friends on Disco Fish and Corpse Pounder (how about those names?). 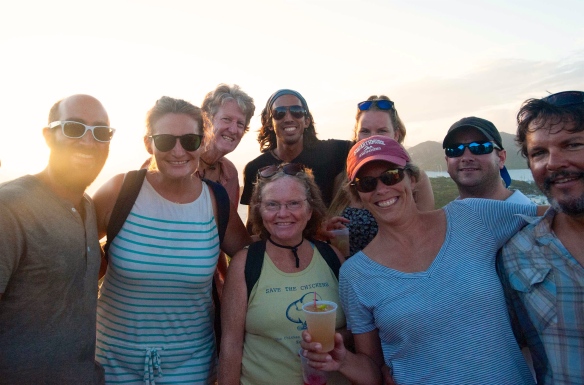 Antigua is pretty compact in size and has good anchorages all the way round, so we wanted to circumnavigate it, but as the Christmas winds kicked in, we were stuck in port as it howled a steady 20 – 25 knots outside. The winds aren’t so bad but when they are this strong for so long they kick up some impressive seas. We had no interest in bucking 9 – 10’ seas so we went around the leeward half of the island. Here we enjoyed the peaceful and more secluded 5 Islands, Jumby Bay and Great Bird for a holiday feast aboard Nightgale Tune, nice snorkeling and kite boarding.

A little kiting around Jumby.

Antigua is said to have 365 beaches.

A merry Christmas aboard Nightingale Tune

Soon, though, we had had enough and set out on a squally, windy day for the short downwind run to Montserrat and its brooding volcano.

5 thoughts on “Anchored in Antigua”