Whale sharks are the largest living species of fish.  They are docile sharks that feed on plankton and can grow to 40 feet.  That’s a big fish.

When feeding they swim slowly and suck water into their very big mouths to filter out the tiny organisms they eat.  We heard there were several of them feeding out in the bay here in La Paz so we went out in our friend’s dinghy (Richard & Audrey of Celebration) to check them out.  They don’t appear to mind divers getting close to them and we were determined to see them in the water.  From the boat you first see that familiar dorsal fin shape moving straight ahead with the tail fin swishing side to side. 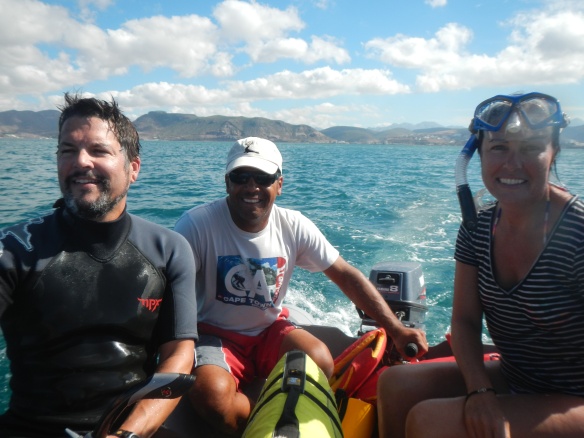 Its clearly a very big shark, so you definitely have to repress that human shark-fear instinct to force yourself to dive in.  Plus, you’ve got to jump in right near it because even though it is moving slowly and deliberately, its still moving too fast for you to catch up to if you don’t start out close.  So you dive in, get your bearings, open your eyes and see a 20 foot shark close enough to reach out and touch.  Even though the thing is generally harmless (although you wanted to stay away from its tail) there’s something about being that close to such a huge animal in its own environment that is a little awesome and scary at the same time.  We all did a couple of swims with them and then left them to feed in peace.

3 thoughts on “Swimming With Whale Sharks”