Over the last year and a half we’ve benefited from the close proximity of the islands of the Caribbean, enjoying day sails to get from one to the next.  So it took a moment to put our muti-day passage routine back in action, but with full sails (well, actually quite reefed sails), full moon and full Ipods our 3 day journey zipped by without incident. We were greeted by the familiar crystal clear waters of the Bahamas as we pulled into the southernmost island of the chain, Great Inagua. 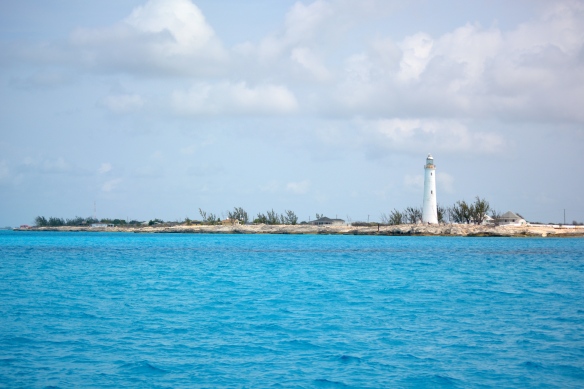 Although the third largest island of the Bahamas its population is just at 1000 and it is no surprise they all know one another and notice a new face.  We had not walked ten feet down the road towards customs/immigration when the first of three people stopped to offer us a ride.    We politely declined because after 70 hours at sea, we desperately needed to stretch our legs.  The friendliness didn’t stop there, as the officials could not have been more welcoming.  We were thrilled to be the first official boat for their newest customs agent, Francis. 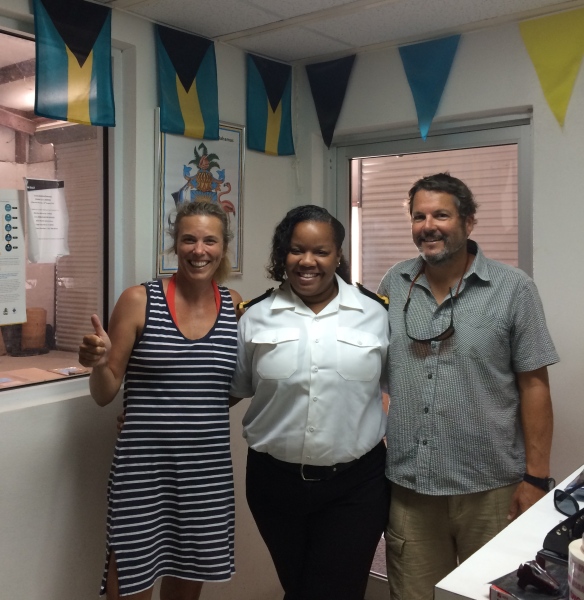 This was Francis’ first day and we were honored Neko was her first official vessel.

Great Inagua may only have 1000 human residents but it is home to roughly 60,0000 flamingos and 140 species of native and migratory birds.  They work in rare harmony with the main industry on the island-salt. 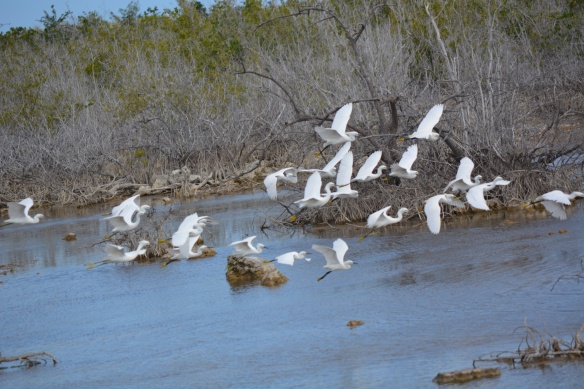 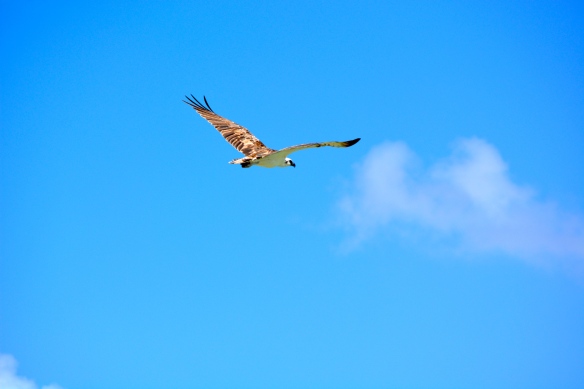 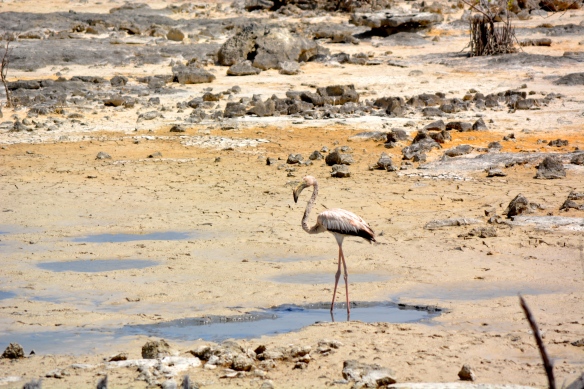 Sorry so far away, but that distant line of pink is hundreds of flamingos

No, he isn’t plastic 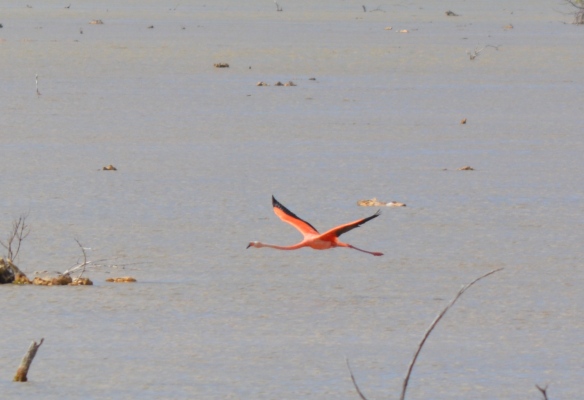 The Morton Salt Company operations cover over 300,000 acres of the island and produce about a million pounds of salt per year.

We anchored in Man o War bay – the only boat for miles around – and booked a tour out to the salt flats and were taken by the beauty of these elegant birds in this other worldly landscape.  Morton floods the flats with seawater and allows the sun and wind to evaporate the water which produces concentrated brine, which in turn grows algae which brine shrimp eat.  And who loves brine shrimp?  You guessed it – our pink pals the flamingos. The shrimp diet is what gives them their pink hue.  The birds help remove some of the impurities and the salt is harvested and ground into different sizes depending on the use , e.g. table salt, de-icing salt, etc.  Man and nature working together is a lovely thing. 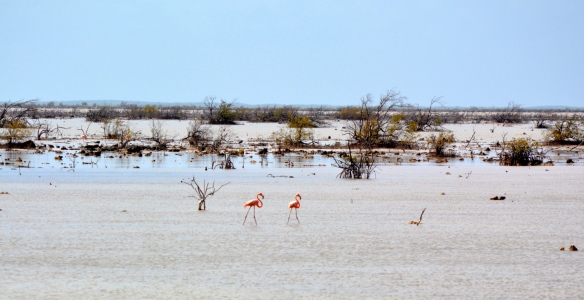 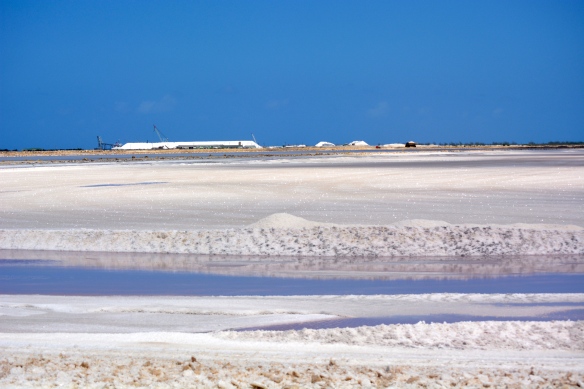 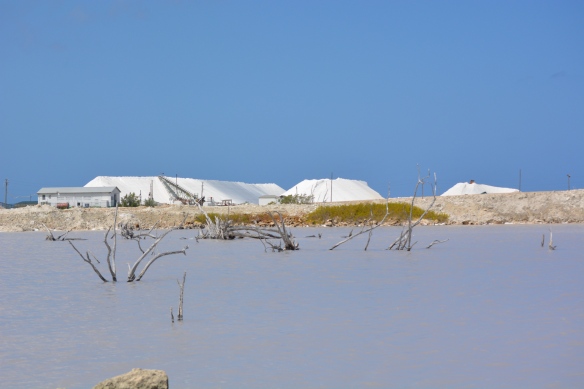 Salt mounds, beyond the flats

Who knew salt could be so interesting?   Maybe we can officially call ourselves old salts now 😉  We loved our time in Inagua.  It has been a long time since we’ve been in a place where we were the only humans for miles around.  We took long walks on the beaches and snorkeled pristine coral teeming with fish.  So far, its good to be back in the Bahamas. 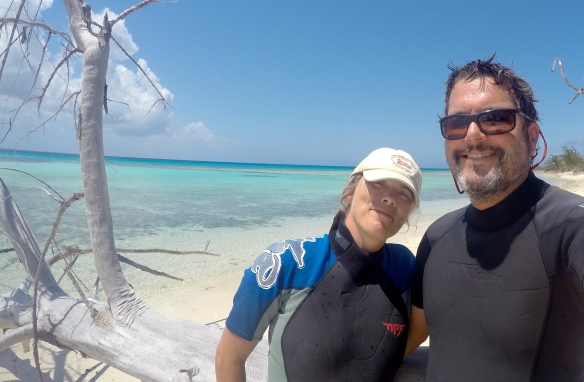 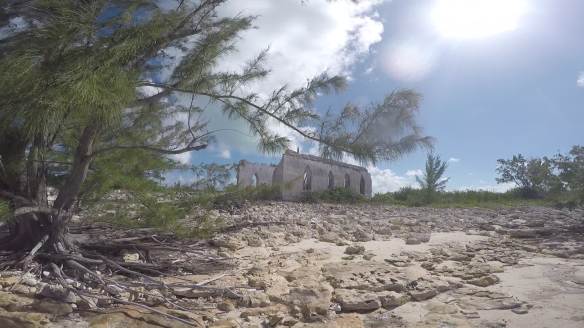 There was once a community here, but abandoned  in 1970s when the few remaining residence moved to Matthew Town 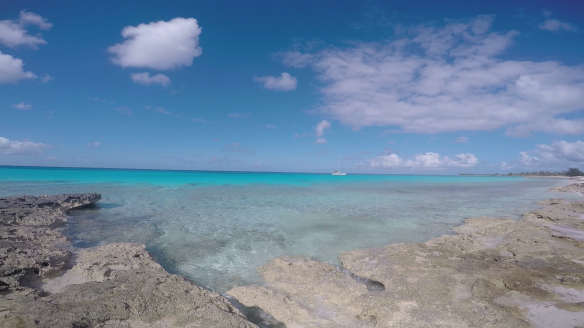 Neko all by herself

6 thoughts on “In The Pink”