What a welcome we received upon our entrance to El Salvador.  We had buddy boated down from Mexico with Kia Ora, Mermaid and Talos IV.  We actually had great winds for part of the trip, so the 250nm journey went faster than anticipated, ending with us all anchored out in the ocean waiting for high tide to “cross the bar”.   The entry into the harbor has a shifting sandbar with waves breaking over it, making it dangerous to cross without a knowledgeable pilot to guide you through the narrow opening.

Even in the opening there is often a cresting wave that causes a boat to surf on in.  Surfing a 30,000 lb boat will make you a bit anxious.  At the appointed time, we lined up with the other boats and nervously anticipated the crossing.   When it was Neko’s turn we went full throttle towards the prescribed path and just as we braced ourselves for a wild ride down breaking waves, we heard the voice of our pilot over the radio welcoming us to El Salvador.  Wow, that was a relief and, frankly, a bit of a let down.  You don’t want to surf the boat, but you kind of want a little wave.  Alas, in the long run I think it was better to have had the uneventful crossing. 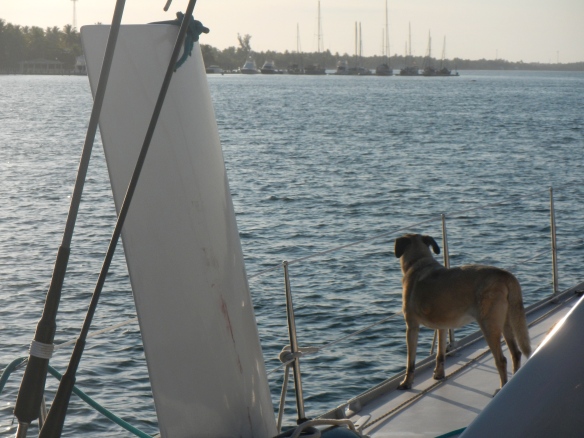 Lucy ready for a new country

They don’t get a lot of tourists in El Salvador and even fewer boaters, so they were very welcoming and friendly.   When we arrived we were greeted on the docks with smiles and cheers by immigration officials, the port captain, locals and rally members.  (We have joined the very informal El Salvador Rally which begins in a few weeks.  In the meantime we plan on exploring on our own and with our other boat pals.)

Welcome cocktail, this is my kind of place

They handed us welcome cocktails, snapped photos, helped with our lines and bombarded us with information.   As you’ve read in previous posts, we normally have to drive or walk miles to officially check in/out of a country, here we only took a few steps to an air conditioned (ahhhh) office with ALL necessary personnel ready to stamp, stamp, stamp our way into El Salvador.

Peter waits his turn for the all in one check in

Apart from their love of official government stamps, El Salvador is really quite different from Mexico.  Everything from the landscape (volcanoes and lush jungle), people (friendly, but a little more shy), food (not spicy) and even their Spanish is slightly different (tend to drop endings of words).  Mexico was great, but we are ready for a change.

We’ve met great folks here and within our first week have been welcomed into their homes, experienced an early season lighting storm,

no not snow, heavy rain

No flash, only the lightening making the dark sky look like day

Pupusas are made of thick corn and sometimes rice flour tortillas and then filled with any combo of cheese, beans, pork, veggies and served with a side of curtido (pickled cabbage)

taken long beach walks along their wide and empty beaches, 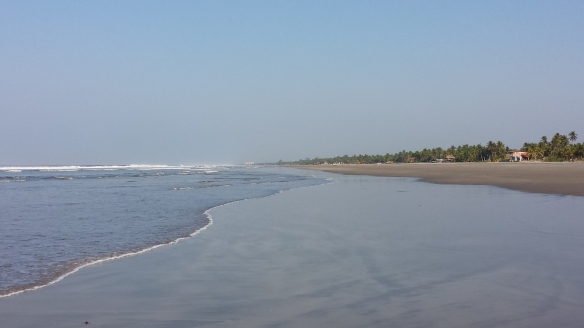 Giant beach all to ourselves

had the boat’s generator removed for repair 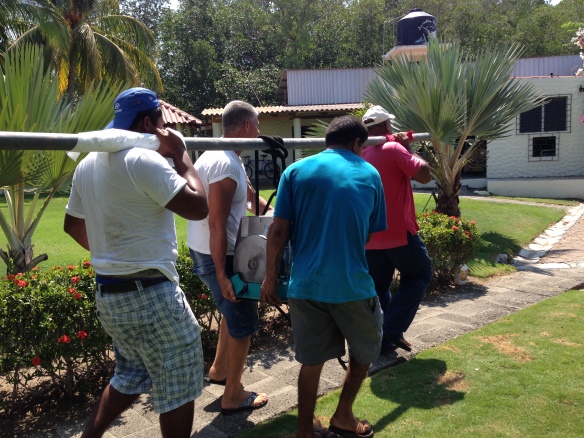 and took a dinghy ride down a pristine winding estuary to a remote restaurant which was merely a thatched platform over the river run by an adorable fisherman Memi and his family. 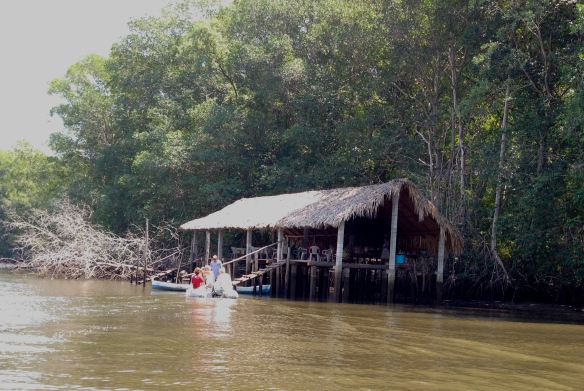 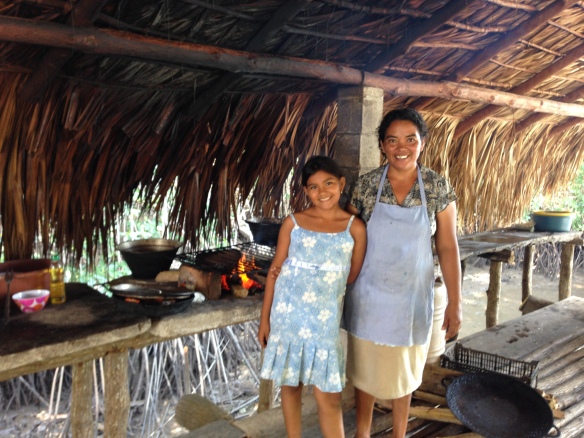 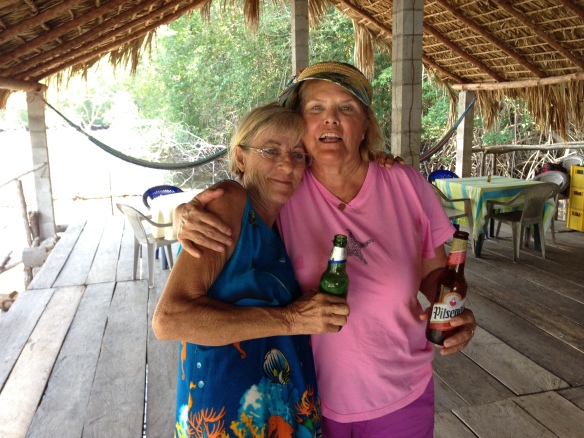 Our new pals Jan and Riza 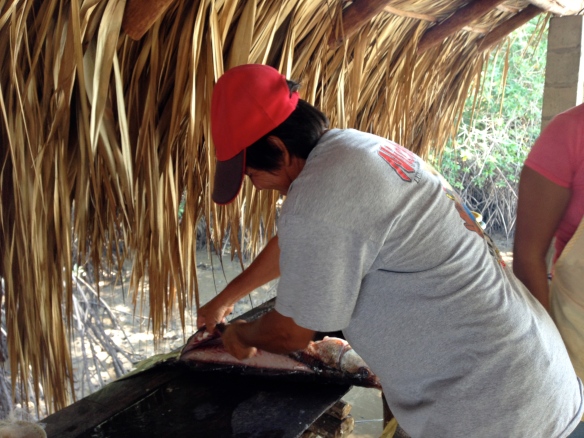 The restaurant grilled us a delicious fish lunch over a charcoal fire right in the thatch-roofed hut.  It was really only a platform on piles in the river with a few tables.  The restroom was a bench in the mangroves across a rickety catwalk. 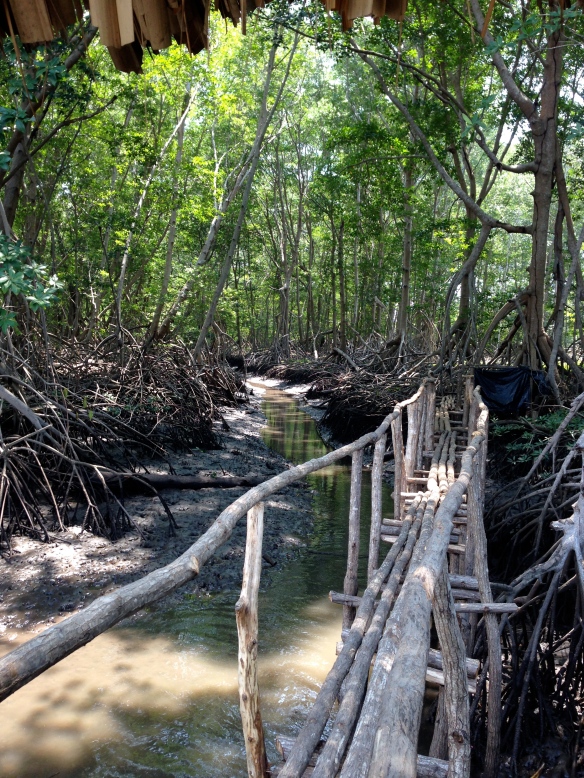 The next day we spent running errands in the crazy city of San Salvador, made even crazier by a hotly contested presidential election.  It was a close race, with both sides claiming victory and demanding recounts; all that was missing were hanging chads.   It’s interesting to note they do not serve or sell alcohol the day before, of and after the election to try to mitigate tempers.  (In the US, they’d be better off shutting down the internet).  Sadly, this goes for visitors as well, so only cocktails on our boat (oh, how we suffer). 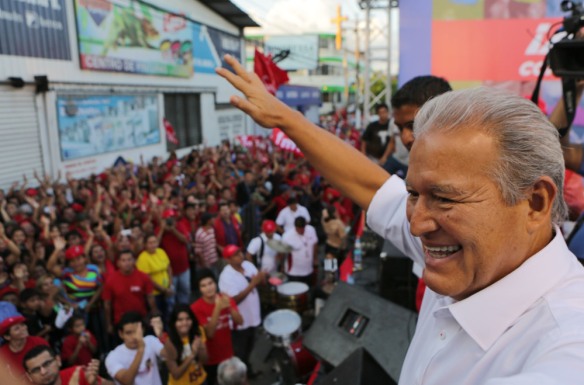 As of now Sanchez Ceren is the declared winner, who was one of five top guerrilla commanders during the 1979-1992 civil war and marks the first time Salvadorans have voted an actual former rebel commander to be president.

San Salvador, like all of El Salvador is a place of haves and have nots.   You see everything from shacks on the outskirts of town to huge homes behind high walls and gates.

Private home outside the city

Private home in the city

Apparently there is a lot of gang violence here, although we never felt any danger, you can’t go 50 feet without seeing guards with machine guns posted outside every store, bank, home, even zipping down the road on a motorcycle.

At least they wear helmets with their guns

Please check your bags and guns 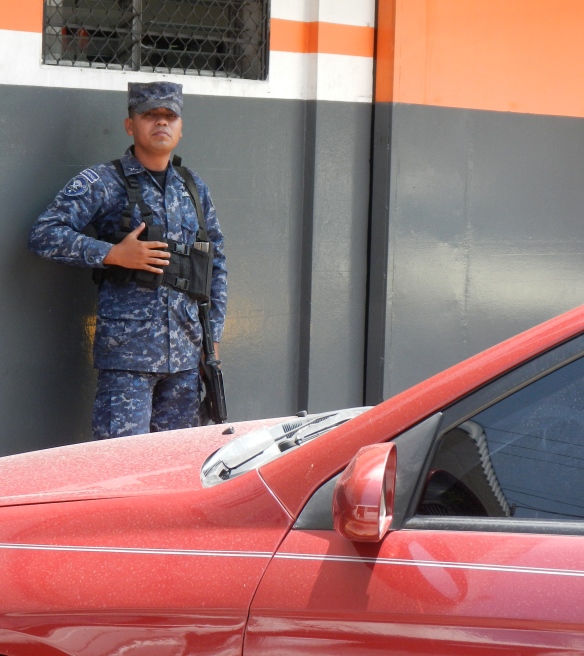 This is the capital and largest city in El Salvador, with almost 2.5 million people in the metro area.   And it is very much a big city, people are busy and going about their business and it is an interesting change of pace to be somewhere where tourism isn’t the name of the game. 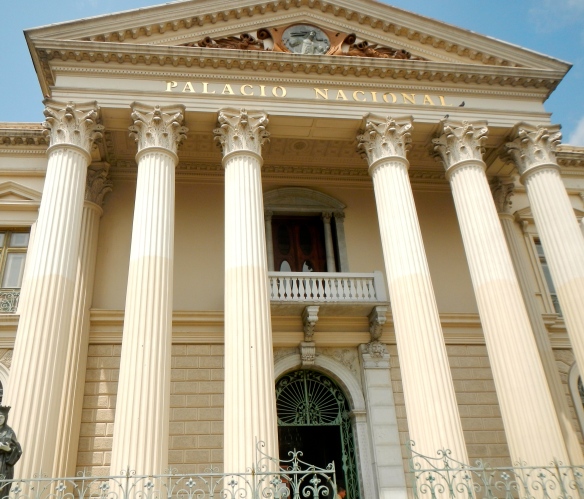 We love getting to know this vibrant country whether it is deep in the mangroves, in a small villages or in the big city.  We are looking forward to seeing more.

4 thoughts on “Bienvenido a El Salvador”